However, the process this time around will be different in the details.

Where the Fed under the quantitative easing of a decade ago was buying assets to pull the economy out of the Great Recession, this time it will be looking to meet demand for cash as it tries to calibrate the proper level of reserves that banks need. 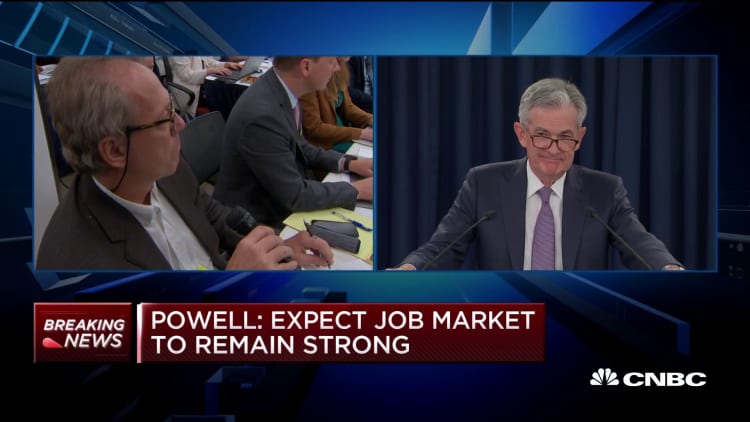 It’s an important distinction as markets recover from a recent liquidity crunch that was reminiscent of those dark days more than a decade ago. Last week, overnight repurchase, or repo, markets froze up and sent short-term yields soaring, a move that included the benchmark funds rate trading out of the range that the Fed’s trading desk targets.

The Fed is in the process now of conducting overnight repurchase, or repo, operations to make sure that funding for overnight loans stays constant and the funds rate trades within its targeted range of 1.75%-2%. In announcing the program, officials noted that the last time such a process happened was 11 years ago, amid the dark days of the crisis when liquidity dried up and caused a panic on Wall Street.

The similarity has not gone unnoticed.

“Anytime you have anything juxtaposed to 2008, it tends to cause anxiety. What it did was suggest that the Fed doesn’t have a handle on this,” said Quincy Krosby, chief market strategist at Prudential Financial. “They weren’t able to foresee this. That said, if they could come up with a facility for this, the issue will dissipate as a source of concern.”

That facility has involved a series of repos where the Fed provides cash for safe assets, like Treasurys and agency debt, that will continue through at least Oct. 14. There has been such demand for the daily offerings that the New York Fed announced Wednesday that it will up the amount of the offering to financial institutions.

Beyond that, the Fed will be looking to further expand its asset purchase programs and grow the balance sheet in what Chairman Jerome Powell described last week as an “organic” process rather than QE4, or a fourth round of QE

Regardless of how it’s done, markets will be looking to see the Fed undo what became known as “quantitative tightening” as it contracted its asset holdings, and to become less restrictive in monetary policy beyond lower interest rates.

“The balance sheet is incredibly important,” Rick Rieder, global chief investment officer of fixed income at asset management giant BlackRock, said at last week’s Delivering Alpha conference presented by CNBC and Institutional Investor. “The Fed needs to let the balance sheet grow. [Powell] alluded to it and you saw it played out in spades [last] week.”

During the tightening process, the Fed allowed more than $600 billion of assets to roll off. Correspondingly, reserves fell to $1.47 trillion, the lowest since March 2011.

Fed officials say they’re continuing to try to gauge the amount of reserves banks need to function properly; Powell said the issue and the potential for balance sheet expansion likely will be taken up at the next Federal Open Market Committee meeting in late October.

Whether the Fed is up to the task and can determine the proper operating level without disturbing markets, and without indicating that this is just another round of QE.

Growth could hit $400 billion this year

“They definitely can manage it if the Fed is committed to it,” said Lance Pan, director of investment research and strategy at Capital Advisors Group. “The last time they did market operations was before the financial crisis. The Fed needs to re-educate the markets.”

Markets are likely to hear plenty on the Fed going forward.

One possible additional program will be a “standing repo facility” in which the Fed will be at the ready to exchange liquidity for assets, as a backstop against future funding issues.

At the same time, demand for cash is likely to see balance sheet expansion that could reach $400 billion over the next year and $150 billion a year thereafter, according to estimates from Bank of America Merrill Lynch. That would quickly undo the roll-off that culminated in late August.

Last week’s repo difficulties were “a largely technical dislocation” but one that the Fed will need to learn from, said Michael Reynolds, investment strategy officer at Glenmede Trust.

“Investors really want to see a long-term solution,” Reynolds said. “I would expect perhaps by year end or early next year we get a little bit more clarity on what the Fed wants to do here. But I don’t think it’s something that should be market-shaking at this point.”